This is a report of a hike to Mount Greylock, Massachusetts, USA.

The following is a picture from Google Earth that does not reflect the weather condition of the hike. More pictures 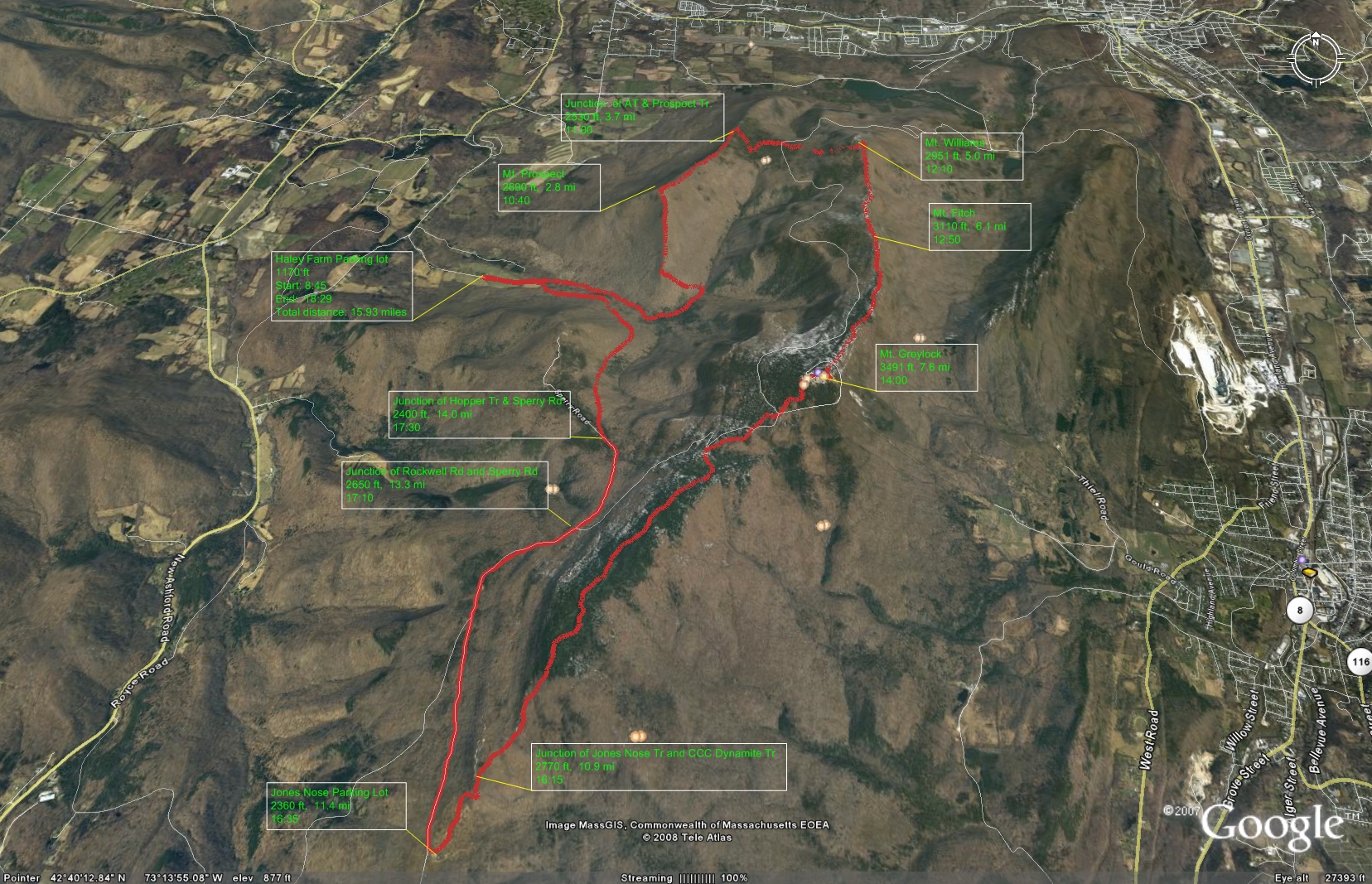 After hiking Madison, Adams and Jefferson on April 20, 2008, I started to prepare for the semi-presisential traverse (from Appalachia to Pinkham Notch). I noticed a hike of about the same distance but less strenuous( due to much less elevation gain) organized by AMC, I decided to use it as a warmup; so I signed up for it. The leaders are verteran hikers Kathy Falls & Bob Asch. I was wondering if I would need to find a lodging place in Western Massachusetts the night before the hike. Kathy said the people would carpool to go there on that day. Microsfot Streets &Maps told me the trip is 184.6 miles and takes 3 hours and 9 minutes. I planned to start out around 4:30.

I packed most things the night before and got up at 4:15 on the day of hiking. I was so inefficient that I did not start out until 5:13. I knew that I would be late and felt bad. I tried to call Kathy to ask her not to wait for me when approaching the start time - 8:00 - and I was still 20 miles away from the meeting spot. I was greeted by voice mail. I was surely the last person to arrive following a lady who did 5 minutes earlier. I urged them to start and let me catch them because I needed a few minutes to organize my things. Kathy led the group to start, but Bob and Rob Powers kindly waited for me.

My hike finally started at 8:45. After walking 100 meters, I got to so paranoic that I ran back to my car to make sure it was locked because I forgot to lock it at last hike.

The weather was very mild - sunny with some cloud. The temperature was between 15°C - 20°C. The trail was completely snow free, a bit surprising to me because I expected some snow residue. It was quite dry except for a few spots. My boots got wet only once. I expected to see wild flowers all over the mountains, instead, they were just some spots on the two sides of trails. The mountains are beautiful enough for us to enjoy all day long. Bob and Rob are very experienced hikers. We talked about all aspects of hiking. I was particularly interested in Rob's Presidential Travers experience which he did for the first time last year.

We took Hopper Trail for only 0.2 miles, then Money Brook Trail and Mt Prospect Trail to Mount Prospect which I reached at 10:40 after many breaks. We continued on Mount Prospect Trail, then got on Appalachian Trail and reached Mount Williams at 12:10. After a bottle of water and a Powerbar, I had a short nap because the break was so long. It was 14:00 when we reached the highest summit in Massachusetts - Mt. Greylock (1064 m). That was the only place I could feel a little bit windchill because it is the only exposed place of the entire loop. The summit can be reached by auto roads (Rockwell Road and Notch Road) so it has parking lots. It has a very well maintained ground, a monument and a lodge. The views of distant mountains are spectacular. We spent about 20 minutes there. Rob and I took pictures of each other with my camera.

We started descent via the Appalachian Trail, then switched to Jones Nose Trail. Somehow, we missed the junction of CCC Dynamite Trail and ended up at the end of Jones Nose Trail, a parking lot. We walked two miles on Rockwell Road to reach Sperry Road in 35 minutes with some elevation gain, then started the final descentBob seemed to feel upset with himself due to missing CCC Dynamte Trail - the original planned route, but no one has shown the slightest displeasure with this. Getting lost or missing a trail sign in hiking happens frequently. It was 18:29 when we reached the parking lot.

I was quite hungry as always after a long hike and asked where I could find a Chinese restaurant. I was craving for hot and sour soup. Kathy suggested Chopstick a few miles in Williamstown about a few miles from the parking lot. She also kindly offered to lead me there. Bob, Kathy, Brenda and I had a very satisfying dinner and enjoyed a very pleasant conversation at Chopsticks. I took Rt. 2 instead of going back to Rt. 90 to go home. It is about 25 miles shorter but it takes longer time because Rt. 2 goes through many towns had quite a few zig-zags in the first 20 miles. I had a milk shake at McDonald and got home at midnight.