This is a relatively brief description of a very pleasant day hike to Mount Lafayette in the White Mountains in New Hampshire, USA. 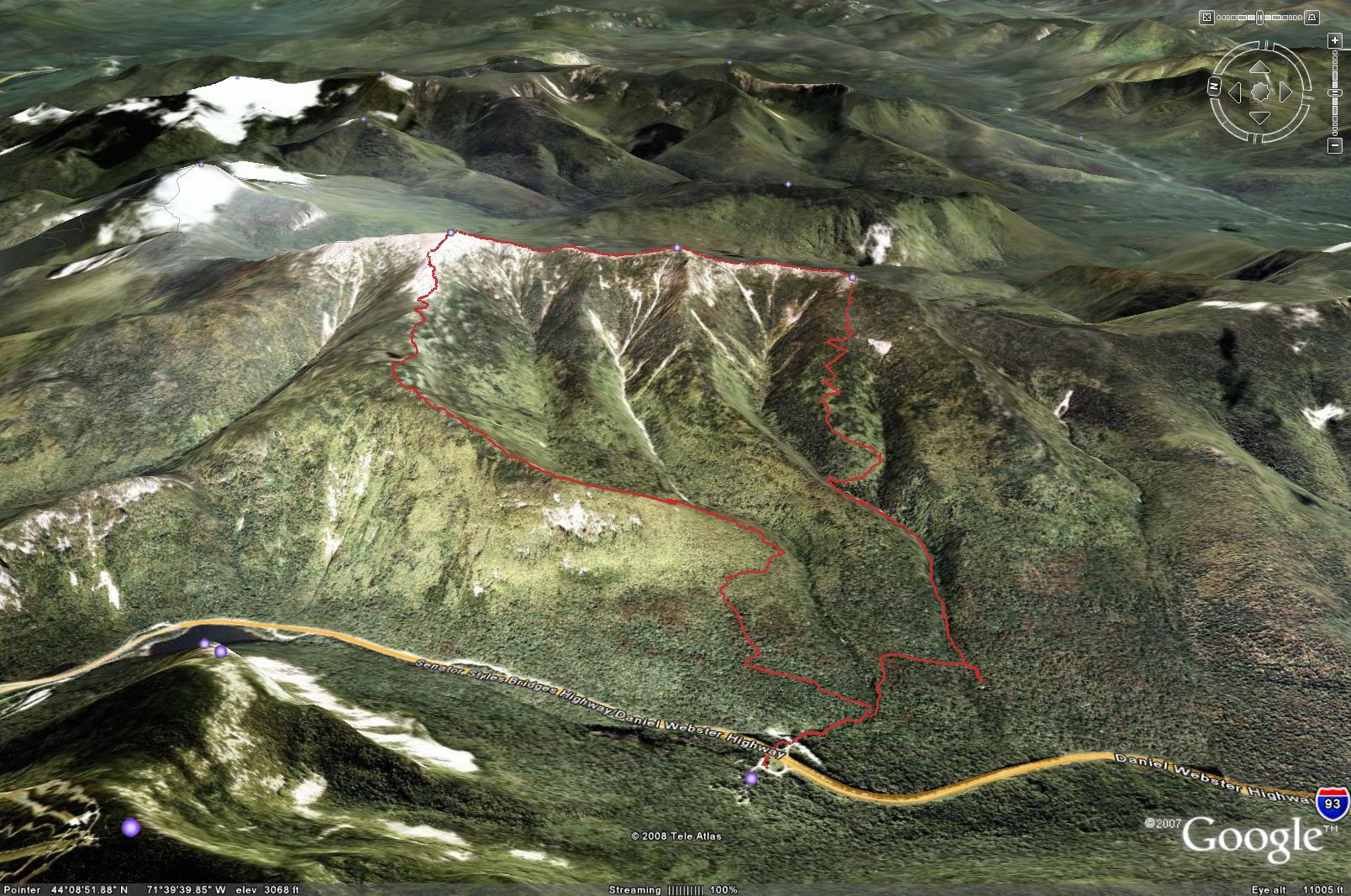 Two hikers were found about 19:30 on February 11, 2008 with one pronounced dead on the popular loop to hike Mount Lafayette in New Hampshire. Only 5 days later, on February 16, a gentleman from Boston was rescued from the same hiking loop. Unfortunately, the reports lack the depth regarding how the hikers got into the situations probably due to the hikers' refusal to talk to reporters.

The pairs' situation is very bizarre. Why were they not together though close? If they were fighting for life, why didn't they do it together? One was near some scrubs leaving the other lying on his back on the ridge. The tree line is probably a few hundred feet away. Why didn't they go below it? Since they were still on he trail, they probably did not get lost. The only explanation is that they were exhausted. The entire loop is less than 9 miles and they did not even finish the first half of it. I am inclined to believe that the tragedy was caused by their ignorance of weather forecast or underestimation of the power of god, and their limited fitness leaving little room for error.

The Boston gentleman is said to have hiked Mount Lafayette 8 or 9 times before and he stayed overnight showing he was at least somewhat prepared to deal with harsh weather. I question the necessity of his rescue. I will come back to my doubt later.

These two incidents prompted me to have strong desire to hike the loop to see it with my own eyes helping find answers to some of my questions.

I am a member of Appalachian Mountain Club (AMC). I tried to book a bed at the Highland Center that is the closest AMC's lodging place to Mount Lafayette, but unfortunately it was full, so I had to book one of the two beds left at Joe Dodge that is 47 miles away from the Lafayette Place.

I left my home in Ipswich, MA at about 6:00 on Saturday (2008-02-23) after a snowy night. To hydrate myself I had a large bowl of very thin oat meal and a bagel. Approaching the starting point - Lafayette Campground, I stopped at Flume Visitor to get some information, but it was closed. I followed the road sign strictly to take exit 34B and saw large parking lots but no sign of Lafayette Campground, but a lot of people with skis. I went into a room to ask a lady about Lafayette Campground, but this friendly lady knew little about it and pointed the her place on the map. I found I passed the campground 2 miles ago. I drove south on the divided Rt. 93 and found the campground on the west side. I saw hikers and snowmobilers. Mount Lafayette is to the east of Rt. 93. I could not figure out how to cross the divided Rt. 93. I asked a person who was just about to start his hiking and he told me there is tunnel nearby for crossing Rt. 93. Later I got to know that his name is Chris from Newmarket, New Hampshire.

My hike finally started at 9:19, about an hour later than I originally planned. The trail looks almost like plowed by some vehicle or machine. I realized later that it is made by snow sledding, snow boarding and lot of snow shoeing. I passed by Chris while he was putting on his crampons. The Old Bridle Path turns left at 0.2 mi where the Falling Waters Trail leads to Franconia Ridge at the Little Haystack without any branching, so I followed the packed down trail without paying attention to directions. I had to answer a call of nature for the third time after leaving home showing I was very well hydrated. At 0.6 mi., I noticed that I was descending. A little descent on an ascending trail is fairly common. The descent was getting longer than I thought. I took a look at the map and confirmed there is no branch, so I kept going until I saw three guys in front of me looking like just out of bed. One of them told me I was coming to the UNH (University of New Hampshire) Cabin after making a wrong turn. I went back up for about 0.1 mi. to the Falling Waters trail and soon saw Chris again. I was wearing my Kamik Hiking Boots without crampons. I wanted to challenge myself to see how high I could go without wearing crampons. Well, not very high. At 0.8 mi. from the start, I could not move a step on a slope of about 45 degrees. I took off my crampons from my backpack and put them on awkwardly on the steep trail. Soon, I caught up with Chris again and we introduced each other and found we were doing the same loop. Chris was wearing a backpack of 15 kg while I was wearing a backpack of about 3 kg. Chris prepared for the worst - having to stay overnight on the mountain. I could understand that Chris needed breaks frequently. The breaks could not very long simply because we got cold very quickly. I was wearing a pair of waterproof double layer running pants and a fleece jacket on top of Drylete long sleeve. I felt very comfortable as long as I was moving. I managed to forget my camera at home. I left it by a battery charger when I was charging its batteries. Fortunately, my mobile phone had a camera with 1600x1200 resolution. I reached the Franconia Ridge at the summit of Little Haystack (4760 ft) at 11:56, 2 hours 37 minutes from the start.

After taking a few pictures, I had to keep going to keep me warm while Chris was having his lunch. I saw three other hikers on the summit. I reached the summit of Mt. Lincoln (5089 ft) at 12:31. The weather was unbelievably good. The visibility seemed to be infinite and wind speed varies from 0 to maybe a few miles per hour. I found a spot below huge rocks to have a bite of Powerbar. Even I put the Powerbar in an inside pocket of my fleece jacket, it was still hardened by low temperature. I had to bite hard to manage to take about half of a bar, then I resumed the ascent. I ran across about half a dozen hikers from the Little Haystack to Mt. Lafayette. The trail is very well marked and safe.

I reached the summit of Mt. Lafayette (5260 ft) at 13:08. I saw two hikers one of which was apparently reporting his successful summiting with his mobile phone. The wind seemed to have picked up a little bit. The view from the peak was fantastic. To the northeast is Mount Garfield (4500 ft). To the west are Mount, across the Franconia notch, are Mount Cannon (4100 ft), North Kinsman (4293 ft) and South Kinsman (4358). After taking a few pictures with my mobile phone, I started descent followed by a nice fellow who helped take a few pictures of me. The first 0.1 miles or so are steep and exposed. It looks bit scary because if one falls, he may go down very far before anything can stop him.

Within 1.1 mi., I reached AMC Greenleaf Hut (4200 ft) at 13:54. I had to answer another call of nature in addition to the one I had on new Mt. Lincoln. So far, I drank only a small bottle (327 ml) of spring water. I might have over-hydrated. It did not hurt. My feet were wet. The hut was closed. I sat under a deck to try to get water out of my shoes. My socks were soaked, but there was not water in the shoes only some tough ice around the entry of the shoes. I realized that some snow got deep into my shoes and melted. Some stayed at the the top of quarter and turned into solid ice. I removed the ice and resumed my decent via the Old Bridle Path. A segment of the trail is at the brink of a ravine facing the Franconia ridge offering spectacular view of Mount Lafayette, Mount Lincoln and Little Haystack. Except for a few spots, the Old Bridle Path has relatively gentle inclination to the contrary of the Falling Waters Trail. I was imagining what I would do if I got lost on this trail like the gentleman from Boston. The trail is about a mile a so from Rt. 93 if descending straight down. The snow was about 4 or 5 feet deep and the ground are covered with trees. Though it would not be easy, one could descend with snow shoes. Without shoes, I would try to sit and glide down. With the help of trees, the risk would be minimal. It would not any worse than my fighting out of Dry River Wilderness the year before.

I reached the Falling Waters Trail at 15:14 and reached the parking lot at 15:20. There were still quite some cars there indicating many hikers were yet to come back or would camp overnight.

Because of my parking on the wrong side of Rt. 93, I had to travel south 3 miles to reverse the direction in order to go to Pinkham Notch. My car was running out gas and I had no option but drove even further south to the closest gas station. I was a little bit tired and hungry. As always after a marathon or long hike, I craved for spicy and salty soup to restore help restore my electrolyte balance. I passed by two Chinese restaurants, both of which are in Gorham, but they were closed.

As usual, the stay at Joe Dodge was very pleasant. The dinner there is always hearty and tasty. I sat with Joe from Fall River in Massachusetts and the evening program presenter, pianist Cody Michaels and his co-presenter, Paul, the spokesperson the Wild River Wilderness society. After a good night of sleep, I joined a group led by AMC's naturalist Nikki to ski in the Great Glen Trails while identifying animal footprints. It was my first time to ski in groomed trails and the experience is much better than skiing on farms and state forests, parks which trails are not maintained. I could not help skiing for another hour after the group activity was finished.