This is a report of Presidential Traverse Hike in New Hampshire, USA.

The following is a picture from Google Earth that does not reflect the weather condition of the hike. More pictures. 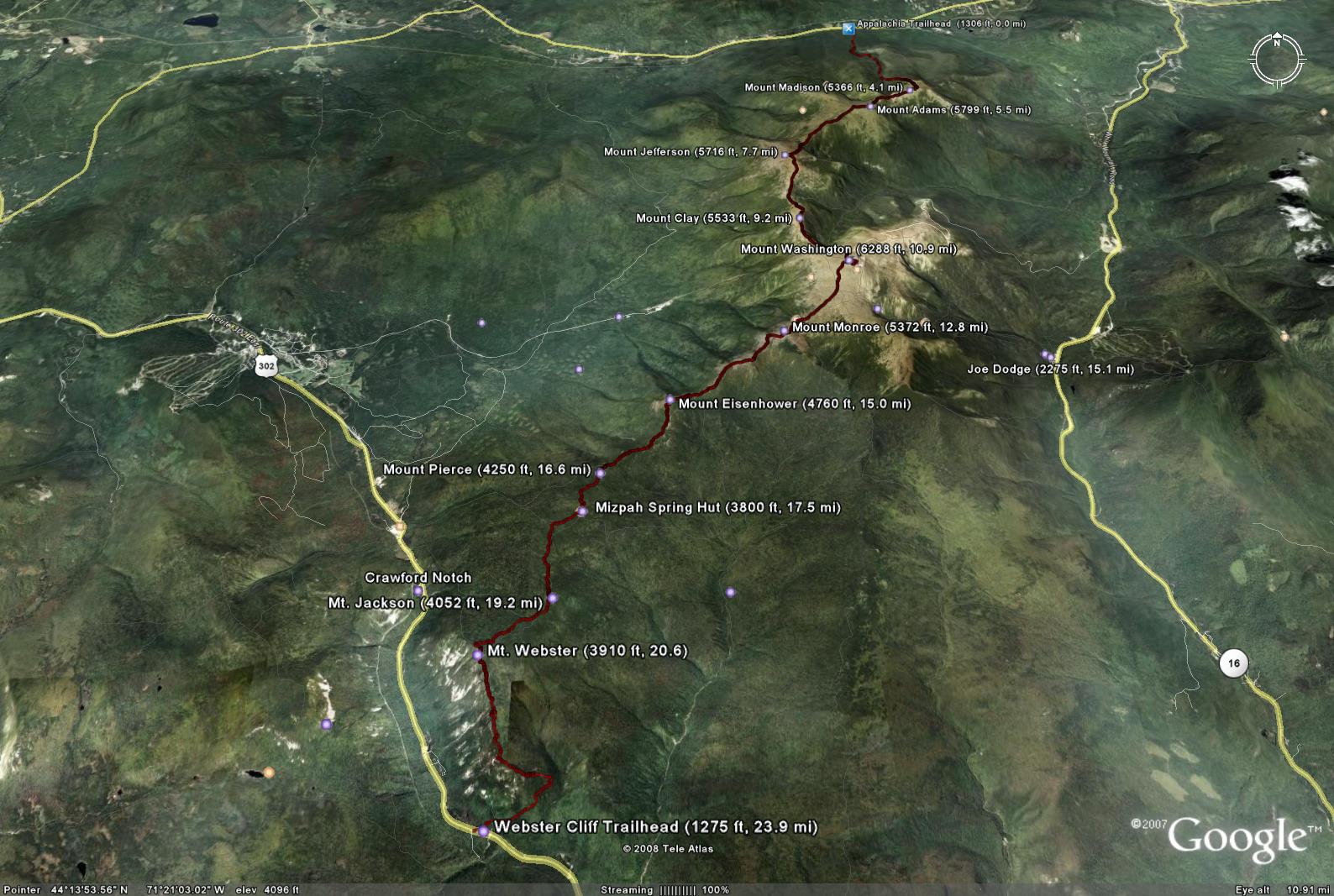 I originally planned to stay at the Highland Center but for convenience, I decided to share a room at the Four Season Motor Inn in Twin Mountain with Rob and his friend Bob. He is a regular guest at the motel and gets a special rate there. He did an excellent job in organizing this.

I left work at 13:00 on Friday July 25 and got a takeout at Hong Kong Cafe in Danvers. It was my favorite entry - Singapore Rice Noodle. I ate it in a rest area on Rt. 95 then had a short nap. I stopped at a gas station to refuel my car. I was in touch with Rob by mobile phone. The regular Friday traffic jam at Conway killed at least 15 minutes. Though made the right decision to get off Rt. 16 and take the West Side Road to Rt. 302, but I took a wrong turn and got back to Rt. 16 and had to go through the busy downtown of North Conway. When I arrived at the Highland Center at 17:15, Rob and his friends Bob and Denise were already there waiting for me, but for just a few minutes. They spotted Rob's car at the parking lot of the Highland Center and Bob's car at trailhead of the Caps Ridge Trail in case people bail out. It is only 2.5 miles from the summit of Jefferson. I shuttled them back to the Four Season Motor Inn and had a good dinner at the only Restaurant in Twin Mountain followed by ice cream. Twin Mountain is essentially a village with a population of a few hundreds. It is surrounded by beautiful mountains.Our room is facing Twin Mountains in distance across Rt. 3. We went to bed at 21:00.

The hike finally started at 5:34. The weather was good - cool with a little breeze. There were five of us -Rob, Bob, Denise, Steve and me. The Valley Way and Watson Path had quite a few wet and muddy sections, but one could maneuver through them and keep the feet dry. We reach the summit of Madison at 8:02. I headed down to the Madison Spring Hut quickly to have my breakfast. I got there at 8:30 and spent about 15 minutes to have lemonade, bread, brownies and use their bathroom afterwards. This was very similar to my daily morning ritual - washing, running, breakfast, shower.

We reached Adams at 9:26. Denise finished all of the 48 4000-footers in New Hampshire by summiting Adams. We congratulated her.

Since I like to take pictures at each summit, I continued ascending when the group was having a hydration break at the Edmands Col. I reached the Jefferson summit at 10:39. I could not believe my eyes when I saw a 5 years old girl who hiked 5 km with about 820 m elevation gain. Her mother told me the longest hike that she has done is 8 miles. This is way beyond what I used to imagine the endurance limit of a 5 years old kid.

I reached the presumable Mount Clay summit at 11:35. From then on, the view of the Great Gulf Ravine is spectacular from the Gulfside Trail. I took my time to enjoy the views and took pictures. Chatted with some hikers and looked map to figure out what we were looking at in the amazing views. I was way behind the group. Steve and Bob reached Mount Washington summit at 12:20, Rob and Denise at 12:28 and I at 12:38. The Sherman Adams Visitor Center was very crowded but I spotted our group at table perfect for me to charge my GPS watch because there is a electric outlet by the table. The line at the food service was between 20 to 30 people long. I bought two hot dogs, two bowls of soups - clam chowder and chili. There were delicious. Steve's wife, Kathy brought their 9-month old baby Norah to the summit by taking the auto road. She also brought me the three bottles of Gatorade that I gave her earlier and the turned out to be very helpful. Considering I might spend time taking pictures, I headed down to the Lakes of the Clouds Hut as fast as I could. My stomach felt funny and I spent about 10 minutes in the bathroom of the Lakes of Clouds Hut. Later, Bob told me he had diarrhea after his lunch. It is possible the food at the summit had some problem.

I quickly hiked to the summit of Mount Monroe at 14:22 and continued once the others arrived. I reached Mount Frankly, a small bump between Monroe and Eisenhower, at 14:44. I reached Eisenhower at 15:26 and Pierce at 16:19. At pierce, we saw a gentleman from Florida hiking the entire Appalachian Trail hoping to finish it before Thanksgiving. The trail between Pierce and the Mizpath Spring Hut had quite some wet, muddy and slippery sections. I was slowed down significantly. I could feel the pain at my right ankle which I injured in March when skiing. We marched to Jackson after a break at the hut where I failed to find soup that I desired greatly. We reached Jackson at 17:37 and Webster at 18:18.

I felt quite good and suggested I hike all the way on the Webster Cliff Trail to Rt. 302 to finish the longest version of the Presidential Traverse if others just wanted to go down directly to the Crawford Notch. Rob was concerned of the risk of solo hike at this later phase of a long hike. Their underestimation of my endurance is very understandable. Eventually Steve graciously agreed to join me and we did not waste time and continued on the Webster Cliff Trail. This route is only less than a mile longer but is very rugged for the first two miles. The pain at my right ankle was getting worse and I had to be very careful when landing my right foot. This section of trial has quite a few view points with amazing scene of the mountains to the west of Rt. 302. Even Rt. 302 and Saco River parallel to it right beneath the nose look very pretty. Steve was much faster. He waited for me at each view point while appreciating the beauty of nature. I urged him to hike at his own pace and not wait for me. It was getting dark. The sunset was at 20:10, but the high mountains and trees reduced the luminance significantly. Near the end of the trail, Saco River Trail overlaps with it. I can imagine people can be easily confused at the end of long hike with fatigue. I reached Rt. 302 at 20:10 and saw Rob and others waiting for me and changing their sweat soaked clothes. They yelled at me and I raised up my arms in V shape to mark the victory of this long hike.

We rode in Rob's truck to Fabyan's Station Restaurant and Lounge and had a good dinner there. The thunderstorms started on our way to the restaurant after the sun shone over our path all day. I had half a rack of baby ribs and contributed an appetizer to the group and paid for Rob's wine to express my gratitude for his organization. It was passed 21:00 after we finished the dinner and the restaurant was closing. We went to Caps Ridge Trail to drop Bob and Steve who took Bob's truck and drove to the motel. The truck was the only vehicle at the parking lot. Then we fetched my car at Appalachia where there were many vehicles in the parking lot. After a long hike and a very hearty dinner, I was extremely sleepy. I tried everything to keep me from falling asleep behind the wheel - opening windows, pinching my arms, hitting my head. I was so glad that I arrived at the motel safely. However, I forgot to close the windows of my car and there was rain overnight.

I woke up at about 6:30 and I knew that I would not be able to fall asleep again. I went out to have a walk. The motel has a very beautiful garden and the owner told me his wife enjoys horticulture. With the help of the owner, we took group pictures in the garden then on the deck with the Twin Mountains as the background.

I took Rob's suggestion and stopped at Lafayette Place Campground to hike to the Lonesome Lake. I started at 9:05 and took Hi-Cannon Trail, Dodge Cutoff Trail and Around the Lake Trail to reach the AMC Lonesome Lake Hut at 10:15. I had a very nice brunch at the hut - corn bread, tomato soup and lemonade. As always, the hut staff were very friendly. Then I had a nap at the platform by the beautiful water. It was forecasted to have thunderstorm so I did not want to go any further. I hiked down via Lonesome Lake Trail to the Lafayette Campground which I reached at 11:50. Completely to my surprise, I met my hiking friend Joe, whom I had been trying to contact many times but been unable to due to lack of cellular signal. We chatted for about 20 minutes and I drove home home. As usual, I stopped at Concord to refuel my car taking advantage of the cheaper gas at New Hampshire. I did my grocery at the Market Basket in Haverhill on Rt. 97. A dinner of fresh baked bread and fish soup made me feel great. 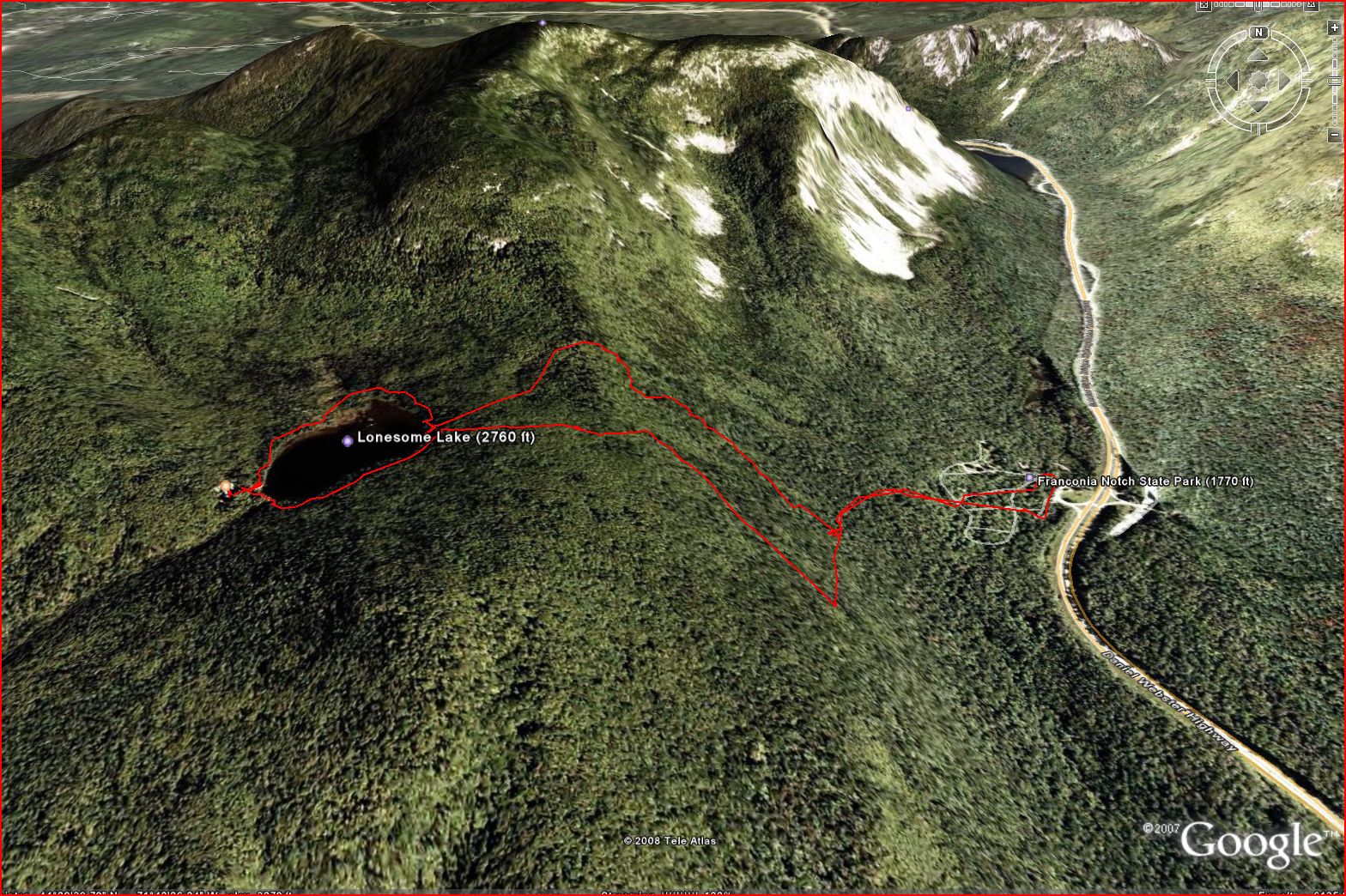